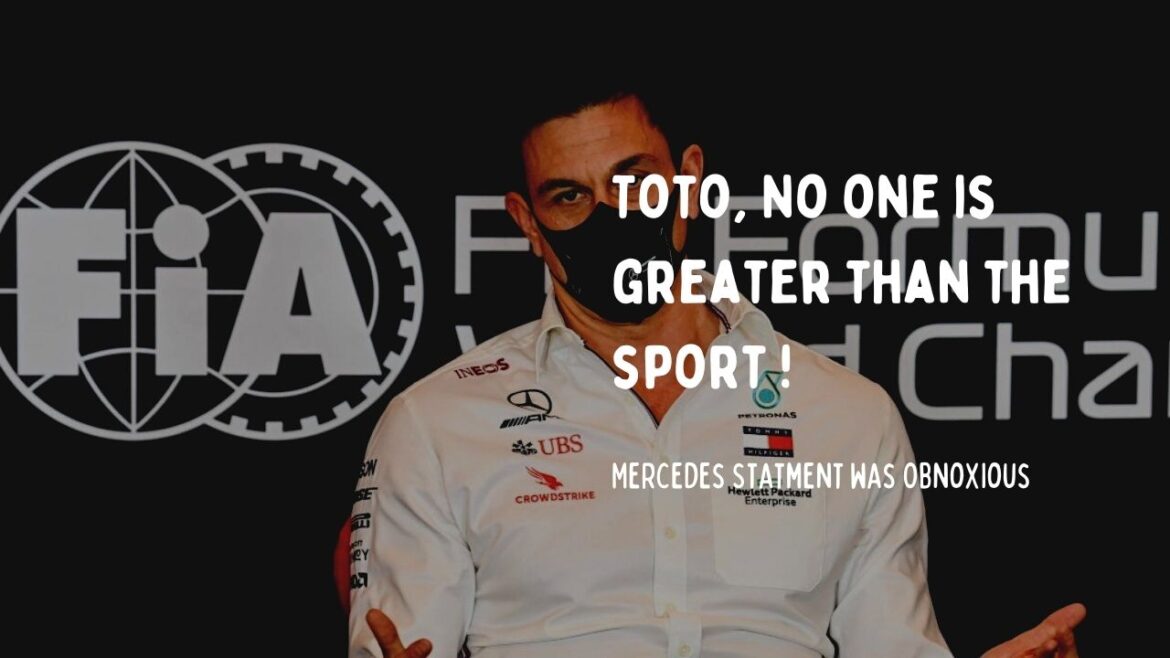 The statement from the team started as follows

We left Abu Dhabi in disbelief of what we had just witnessed. Of course, it’s part of the game to lose a race, but it’s something different when you lose faith in racing.

When you gain popularity and make world changes and earn Knighthoods because of the sport and you dare to say that you lose faith in racing is over the limit. Lewis Hamilton was magnanimous at defeat and showed what a true class gentleman he was during the defeat.

Though there were questionable decisions about the race and many inconsistent rules applications in the decision there were times where everyone thought FIA is favouring Mercedes. There were no statements and moaning then but why now.

In a sport where split-second decisions changed many a course of the race and championship, it is a bit of an idiotic statement. Safety car scenarios are part of the strategy of all teams how you play yours is part of winning and losing races. It is the part and parcel of the sport.

We appealed in the interest of sporting fairness, and we have since been in a constructive dialogue with the FIA and Formula 1 to create clarity for the future, so that all competitors know the rules under which they are racing, and how they will be enforced.

Thus, we welcome the decision by the FIA to install a commission to thoroughly analyse what happened in Abu Dhabi and to improve the robustness of rules, governance and decision making in Formula 1. We also welcome that they have invited the teams and drivers to take part.

When during the interview you specifically said that there is no point in talking to Michael Massi over this. We even know that the stewards and the F1 stewarding is inconsistent but that doesn’t mean you protest when nothing when it goes your way and protests everything that comes against you is just petty and childish.

The statement went on to congratulate Bottas, Praise Lewis and the team back at the factory and indeed congratulate Max Verstappen for his title. They wanted to make an indirect point that Max Won only because of FIA help and because Mercedes did not appeal.

But it’s very clear that the ICA has no power to force the FIA to give over the WDC, and can only strongly push for them to pay reparations and strong encouragement for them to change the rules. I would bet almost anything on Max keeping the WDC, but there is some chance of the FIA paying out damages – although that’s very unlikely because all teams have signed away any right to monetary damages by accepting the FIA decisions in advance. I hate to say it, but I don’t think anything will happen even if Mercedes and Toto appeal.

The rules were written vaguely for a reason, and the teams all agreed on when to interpret them vaguely (first lap, last lap, championship-deciding, and no safety car endings) and why (to let things be decided on the track with racing, not the steward’s room). It’s highly, highly unlikely that anything will change even if there take it to the normal courts and Toto knows this well.

Suggested Reading: Why is FIA Inconsistent

Nobody likes a Poor Loser – Toto

The decision to skip the Gala for the Prize-giving Ceremony is just pity, pathetic and childish. A True championship team lead says “Well, that’s the way the tire bounces. We’ll be back better and stronger than before and make it 8, 9 and 10”. A true champion wouldn’t be so lacking in class as to throw a hissy fit and not show up at the awards ceremony. A true champion is magnanimous in defeat, gracious in victory, regardless of the circumstances.

We lost club races to bad flag marshals, my son has lost hockey championships due to disallowed goals, my daughter has lost rugby championships due to dubious officiating. In every case, we’ve congratulated the winners, went to the pub with them and had some beers, bought them rounds and went back to the garage, ring or practice field and became stronger and better.

One of the reasons I like sport is that you may want to rip their heads off on the field, after the final whistle, you leave it on the field. Toto needs to get over himself.

For a guy who wants to play by the rules, By not showing up, you are the ones disrespecting not only your fellow competitors but the FIA and the sport in general. Bringing the sport into disrepute? If I was the new president of the FIA I would put on a substantial financial penalty on the team for their disgrace and unsportsmanlike behaviour.

Toto Wolff, ask yourself this would Niki Lauda Reacted the same way you did?

One thought on “To Toto – No one is greater than the Sport.”