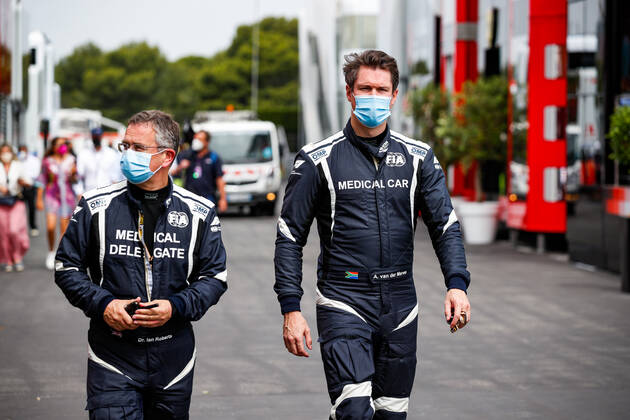 When Romain Grosjean’s crash happened in the 2020 Bahrain Grandprix last year, we realized how the F1 Medical Car is one of the most important cars on the track. Before that we see small accidents happen here and there and some big ones occasionally. But in 2021 there are as many Red flagged sessions as a fake air hostess smile during boarding.

It’s worth reminding and looking back into the F1 Medical Car and why it’s mean meticulous as it is.

The People and Kit in F1 Medical Car

The F1 Medical car driver, Alan Van der Merwe is a man worthy of his weight in gold. The 41 years old South African has been driving the world’s fastest Ambulance since 2009. Dr Ian Roberts, the FIA Formula One Medical Rescue Co-ordinator is alongside him. If Alan is Gold, Ian is as precious as Captain America’s shield. He is a consultant anaesthetist and vastly experienced in trackside emergency and is been appointed to his role in 2013.

The F1 Medical car generally carries one kit from FIA approved doctors and the other from the National Doctors in the country of the visit. ERS gloves for touching the car when ERS light is on and of course fire extinguishers. These are not used often as the handheld trauma bag which is used for first intervention.

There are a plethora of screens in the Medical car. One is the tracking screen to see where the cars are and the other is a biometric screen getting the reading of the driver’s vitals from the gloves. There is an intercom system in the car where two can speak naturally without much effort and comms to the race control as well for instructions.

The first track action of a Grand Prix weekend has a rather deeper note than those that follow. On Thursday, usually between 1400 and 1500, the FIA Safety Car and F1 Medical Car take to the track for an hour of high-speed practice. Bernd Maylander’s safety car is a pretty familiar sight for fans around the world but the Medical Car will spend the rest of the weekend in relative anonymity, should everything go to plan.

In Driving a Medical car, the most important factor is not that you can fast but fast enough to get to the scene. The main thing to consider is the environment, you are driving a big heavy estate car and sharing the track with the fastest cars on the planet. It’s a difficult combination.

On Thursdays, the F1 Medical car will be driving faster than it can do throughout the weekend. It’s about getting into a rhythm comfortable at 98 per cent so that in the race It can drive at 95 per cent and be on the radio talking to race control, looking in the mirrors etc. The driver got some capacity in reserve, and so does the car. You don’t want to be at 100 per cent so that when something strange happens, there’s no exit option.

At The Track and Scene

The track test, together with reconnaissance laps ahead of each running session and the first lap of the Grand Prix (where the Medical Car follows the pack around before pulling into the pits) is the most visible part of the job – but it’s a busy weekend around that for the F1 Medical Car crew. They cover the GP2/GP3 sessions also, and other series as requested, and thus attend a lot of driver briefing sessions, and whenever cars are on track, they’re sitting with the engine running at the end of the pit lane, permanently ready to go.

Like the rest of the world, they see the live TV feed, but they also have extra data feeds supplied by race control, such as the GPS track map and the alerts transmitted from the cars on track, registering impacts and their severity. The latter is vital for the doctors, allowing them a little lead-time in formulating their response when they receive word from race control to proceed onto the track.

Van der Merwe’s job at the scene is to be an extra pair of eyes and ears, and also, where circumstances dictate, an extra pair of hands. As at a road traffic accident, the car is parked to protect the people working at the scene, after that the job is to assist the recovery operation.

Safety in F1 has come a long way from the olden days but we can’t be complacent at any level. 2019 we saw a loss of life in F2 and in 2020 we nearly lost another one. The likes of Halo and HANS have saved many but debates on safety equipment and progress is nearly not acceptable.