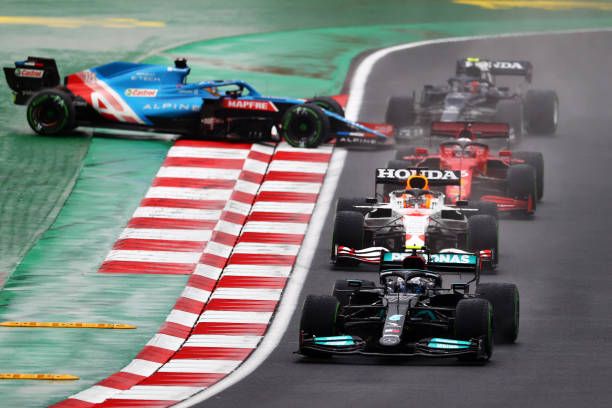 Turkish Gp saw tyre drama, strange strategy calls and screaming radio messages in the latter part of the race. In this section, we look into the strategy that was available and what unfolded in the race.

The forecast predicted that the Sunday race will be dry and that Saturday during Qualifying it will be wet. But boy did the forecaster got it wrong. It was spitting all night long and on Sunday the rain did not stop. This means all the strategy and tyre options that the teams were made available with have gone out the window.

Having a late-season and global warming is running havoc on the races these days as all the races after the summer break has rain drama in it. So the track is declared wet and all the cars are starting in Intermediate tyres.

The only benefactor in this scenario is Yuki Tsunoda as he was on the soft tyre if it was a dry Turkish Gp.

Since it is all inters, one-stop was pretty much guaranteed. But what tyres will everyone go after the pit stop is a million-dollar question?

The crossover points between both wets and intermediates as well as intermediates and slicks are lower than other tracks, and this will have an influence on strategies in changeable conditions.

The cut off timing would be low to mid 1.32 as far as the teams and the information available is concerned. But since the rain stopped, everyone expected a dry run at least after the midway point of the race. But the track has other ideas.

Last year in 2020 the same conditions were prevailing but the track grip was even worse than this year due to the new resurfacing. The drivers ran their intermediates so long, they lost their groves and became slicks. This is why a one-stop is pretty much guaranteed. With conditions expected to be the same the whole race, it was looking gloomy.

The race started and settled in battles and overtakes were happening. There were some slides and overcorrections were happening but nothing out of the ordinary. The rain has stopped but the track is not drying. Lines are forming here and there but still a lot of wet patches.

Daniel as a Rat in Turkish Gp

On Lap 21, Mclaren pitted Daniel Ricciardo, when he came out he was not doing any impressive time and others were matching his pace. The tire seems to go through phases, heating to the core, graining and slick phase and drop off. By lap 30-32 Ricciardo finding the time.

So all teams were looking for a gap in the lineup so they can go through the graining phase without much trouble and attack when that phase is complete. Alonso was first to bite the bullet on Lap 30 of the Turkish Gp but that seemed too early a call as predictions say 34-36 is the time to pit so the tyres are in good shape during the end of the race.

Pitting too early means the tyre will be off the cliff and pitting too late means you end up in the graining phase. All other front runners other than Leclerc and Hamiton pitted in 36-37 laps. But boy did Vettel and Aston martin judged it to be an imperfection. Medium tyre for one lap and yellow flag and sliding and slipping all across the track.

Why pit at the last min

Leclerc and Hamilton as said before pitted too late in the Turkish Gp and ended up in the graining phase. But why pit at the last minute? As said before the tyres are now on the cliff. Leclerc saw this happening to him and asked where will he end up if he pitted now. The answer was hilarious and worthy of a meme.

By lap 49, Hamilton has lost 50 seconds in 14 laps. The right call would have been to pit at lap 37 to 38 he would have ended in the podium. But Hamilton ignored the call and pointed out that it is good to stay out even after repeated attempts to bring him in.

Ocon was the only one who did not pit the entire race and he almost had a DNF. In the risk vs reward battle, Mercedes finally managed to pit Lewis Hamitlon on Lap 50 losing 2 places in doing so. The pit wall has all sorts of information about tyre temperatures, Carcass temp etc. They knew if they don’t pit Hamilton he would have been a sitting duck in the last 8 laps and lose many places and even a DNF.